And Thereby Hangs A Tale…

When humanity fails: The Rafah Border

This is absolutely ridiculous! Here is some of the footage we taped complied in a short report:

I am writing this and I am REALLY hating it. It has been a while since I’ve blogged, however it seems as though most of my posts are becoming about the Rafah border and all the claptrap around it, and I am not in the slightest happy about it. Might as well change the title of my blog into ‘Rafah yesterday, today, and tomorrow: stinging sameness’!!

Bravo Israel! The Palestinian Cause in Gaza has become the Rafah crossing, amongst a few other things. The Palestinian cause has become an appeal for basic human rights for Palestinians, such as the freedom of movement, the right to medical treatment, and so on. People have gotten to a certain point where all they think about is an easy life and mere survival. Even on an international level, all the attention has been shifted to the closed crossings of this enclave. The international community are rarely addressing the right of return or the rights of Palestinian detainees nowadays, as Israel has successfully managed to create a crisis they deny on a 360km piece of land that would shift all of the world’s attention away from Israel’s immense crimes and expanding settlements.

Anyhow, I will write about this as it makes me absolutely angry at how ugly the Palestinians here in Gaza are being treated, and how this degradation and humiliation has become the daily life of hundreds of human beings holding a Palestinian passport. I have talked in my previous post about the siege and what opening the border would do or mean, and I have also shown my cynicism over the recent ‘permanent opening by Egypt’ news. On Saturday, (July 2) I went to Rafah myself to see what things are like now and if there is any change. I was feeling very indifferent and wore light purple (a colour I usually very much dislike and wear on bad days). It took us an hour to reach the border, and while in the car we were cracking some jokes and being ironic about Rafah and Egyptian statements in this regard. As we reached there and saw the closed gates, anger started building up inside me, slowly. I kept my cool and smile, and we decided to interview people and see what is going on.

END_OF_DOCUMENT_TOKEN_TO_BE_REPLACED

Elaboration on the Opening of Rafah Border

I was asked to elaborate more on the issue of opening the Rafah Crossing in a written post, and so I am writing something brief as I am cramming for exams and uni work this month. 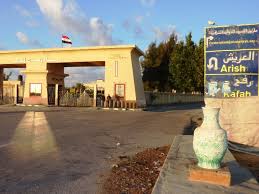 First of all I want to note in short what opening the Rafah Crossing would mean for Gaza. The opening of Rafah will firstly and most importantly allow Gazans to somewhat practice their right for freedom of movement which they have been long deprived of. Scholarship holders would be able to travel with ease, patients would be able to travel for treatment, and families would be able to reunite without the fear of being stuck on either side (in or out of Gaza), and so on.

Equally important would be reviving trade in the Gaza strip and allowing a sufficient amount of decent goods to enter, thus reducing the prices and fortifying the Gazan economy. This has another value which is, hopefully, terminating the existence of smuggling tunnels- that, believe it or not, Gazans hate even more than Israelis as it put the lives of Gazans at risk and indeed caused the death and and injury of hundreds. In addition, it will give Gazans more options and choices, and alternatives to Israeli-made or smuggled products; and this will help Gazans themselves to participate in boycotting Israeli products.

Not to forget the medical insuffeciency and serious lack for the necessary medications and medical equipments that are prevented from entering the strip as well.

On top of all of this, the opening of Rafah at this point will allow Hamas to claim a massive victory against Israeli pressure, and will give new Egypt a stronger stand in Middle-East affairs.

As for Egypt, this move would add patent credit to post-revolution Egyptian policy which has been thus far following the desire of the Egyptian public. Being careful, however, so as not to idealise the new Egyptian government; especially that the Hamas-Fatah unity deal was brokered by Egyptian intelligence rather than the foreign office. As Palestinians, we have learned to expect the worst scenarios and be as realistic as possible, and in this case, we should not be expecting much. I mean until this moment, what has been said about opening the Rafah Border has not been implemented, and as the Egyptian head of the Rafah Crossing, Ayoub Abu Shaar, put it: The number of Palestinians who were denied passage through the Rafah crossing after the Egyptian revolution increased threefold compared to the numbers before the uprising.

So only time will tell.

Personally, What gives me pleasure in all of this is that Israel is pretty confused, and rather pissed! We can see Israeli figures at variance more than ever before haha. You see netanyahu threatening the PA and calling the reconciliation pact between Hamas and Fatah “a tremendous blow to peace”and asking them to choose between Israel and Hamas. On the other hand, you see Perez affirming “President Mahmoud Abbas is still a partner for peace with Israel” and that his decision to reconcile with Hamas “doesn’t free me of the need to talk with him.”

Oh. Click here to see my trip from Gaza to Egypt before the revolution through the Rafah Border

Tuesday night (May, 10) marks my first appearance ever on Aljazeera English. I joined the discussion of opening the Rafah Border on ‘The Stream’- live. The camera quality was crap I looked like a ghost, the connection was beyond terrible (especially in the second part) I struggled to hear and understand what they were saying and was trying to at least pick up some words (it turns out I sorta misunderstood one of the questions towards the end haha), and I was nervous and stuttered a lot; however, it was a fine experience!

What struck me the most is that although the whole episode was only about 30 minutes and discussed two different topics, and although I did not speak for more than 5 minutes throughout the whole thing, and said nothing but common sense, I was swarmed with tweets, blog hits, and e-mails of support! So I cannot but think, “Hmm what it if the world got the chance to hear more bloggers here in Gaza and everywhere where there is conflict, and to hear them speak for more than 5 minutes, wouldn’t that be great?”

‘The Stream’ is great, different, and beautiful in its idea, and a step on the right path. I salute them. Nonetheless, I would love to see a show more dedicated and focused, and lasts for longer than 30 minutes. Perhaps even a channel of its own dedicated to the same sort of effort? 🙂 It would be freaking LOVELY to have a channel exclusive for activists and bloggers; a channel that would give voice to the voiceless.

Follow @Palinoia
"Veiled Zionist propaganda is active, highly organised and widespread; the World press is largely amenable to it, it commands many of the available channels for the dissemination of news and more particularly in the English speaking world" George Antonius

"Truth is on the side of the oppressed." Malcolm X

"If you're not ready to die for it, put the word 'freedom' out of your vocabulary." Malcolm X
“But he that dares not grasp the thorn Should never crave the rose.”